The Under 7s of Madagascar 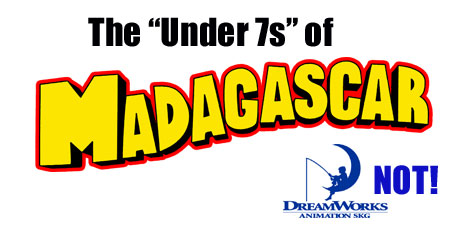 A Fan-TV show airing on Nicktoons and Nick2. (Not in real life.)

It depicts everyone from the Central Park Zoo as being under 7s.(Except Kowalski who is 7 and a half.)

Characters not in show[]

Under 7s Volume 1 Containing seasons 1 and 2.

Best of the under 7s Volume 1 The best episodes from the first 3 seasons.

Best of the under 7s Volume 2 The best episodes from seasons 4 and 5.

Best of the under 7s Volume 3 The four movies

A second movie is coming soon. The plot this time will be that the chimps find a lost Tarzan DVD and they go to the penguin's home to watch it. Afterwards, Mason goes to the jungle thinking that the movie is real.  After that, there will be a Season 5 set when Skipper marries Marlene,(Unknown what happens to his proposal to Lola.) Kowalski marries Doris, Rico marries a puffin named Judy and Private marries an eagle named Tomasina. They have one kid each. Stuart (a penguin), Matt (a dolphin), Eleanor (a puffin), and Dick (a penguin). Alex2 (Alex's teenage son) guides the 4 and teaches them right and wrong. Alex, Marty, Gloria, Melman, Gia, Vitaly, Stefano and Sonya are also in Season 5. It is unknown what animation style it will be

The show will keep on going.

1.A Season 6 will air. This will be the last season.

5. One crossover and 2 more animated films.

After a while,it was aunnoced that there will be no Season 6.

Though it was announced that there would be no Season 2 of The "Under 7s" amazing adventures on the episode 4 disc on its own, Episode 5 on its own says that there will be a Season 2. This been confirmed. Season 2 will only be available together.

A game for Xbox,Wii,PS3,PS2 and Xbox 360 called "Under 7s":The video game. You will be able to play 3 different episodes, The great race,The thing that Judy will never do again and Dick and Melman.

5 comic books will be published including a graphic novel. The graphic novel will be based on Case of the secret zoo only set between Seasons 2 and 3.  There will also be a 4 part prequel mini series.  A comic strip is coming soon. After the mini series there will be "Under 7s" super spangle!

For Halloween, there are costumes of Skipper, Kowalski, Rico, Private and Prince Julien. Now available all year round. In 2016, LEGO will make some sets.

Community content is available under CC-BY-SA unless otherwise noted.
Advertisement