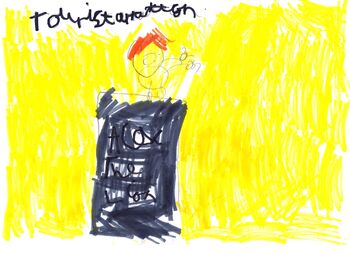 A crate is floating in The New York seas. Slowly the crate comes up into the harbour. Someone opens it and finds a lion cub in there. They take it to the zoo and name it Alex.

Cut to the penguins home.

The bowl moves and a periscope comes out.  Skipper is spying on Alex. "Boys we have been kinging it for 5 weeks and now this guy takes it from us!" he complains. Rico burps loudly. Kowalski says that he has a plan. At midnight they send Marlene to get the keys to the steaks and switch them with grass.

Midnight. But no Marlene comes because Marty might get cross with her. Private finds out that she has not gone and tells Skipper.  "Boys,new plan!" he commands. Cuts to adverts.

Skipper and Rico go over to the lemur habitat. There is Maruice and Prince Julian.(Mort has not been born yet.) Skipper says "Hey Jul. At midnight,go to Callum's office and get the keys to Alex's steaks then switch them with Marty's grass."

When the penguins go Prince Juilan tells Maruice to do the same thing as he said he would do.

He looks around the office and he can't find the keys.  Then he finds the keys on his desk and he goes to pick them up. He than notices that 2 guard dogs have been following him and they make their attack then! Maruice plans to run away but he backs into a pen and pencil mug and it smashes. He opens up a jar of paper clips. He throws them across the floor but the dogs take no notice. He opens another jar-with rubber bands in. He gets one,folds a form on the desk and using the rubber band fires the form!( Being folded into a paper aeroplane.)

It slides under the door! He then jumps over the gap between the desk and the bulletin board!(In slow motion.)

Maruice sees a pin pining up a picture of Callum,his wife and his 16 year old daughter Alice. He pulls the pin off and tosses the pin to the nearest dog, It hits the target and soon dog number 1 is in a deep sleep with a pin in his eye!

Maruice jumps onto the floor and runs to the filing cabinet! He climbs up it and opens the top drawer! Some sellotape is inside. Maruice takes it and attacks dog number two. Sellotape goes round his head,neck and behind. Tail is scriqued up and Maruice bites his legs to come up! The teeth were no challange!

Maurice slaps dog number two to roll over! He then wraps his tummy and finalay his back! Then Maruice feels 4 nails rolling down his spine. It's the penguins! Private bundgee jumps down and grabs him!

"Why have you come? Sorry I haven't got the keys" says Maruice.

"Lemur, we will befriend him!" says Kowszi.

During the credits Callum comes back to the office and sees what a state it's in.

Community content is available under CC-BY-SA unless otherwise noted.
Advertisement